POSTLUDE -  "EVEN NOW": SEEING BARRY AT BARCLAYS AFTER 37 YEARS 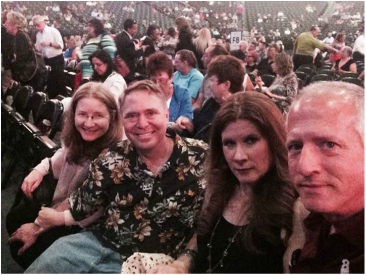 My husband, Forrest, insisted.
I resisted.

How can you not go see Barry?

He had seen a transformation in me since I had shared more openly with friends my love of Barry’s music, its impact on shaping the direction of my life. That indeed, I had even run a Fan Club in Cleveland, Ohio, even briefly the National Fan Club. That’s how involved I was.

Then somehow my life took a dramatic turn and I buried Barry’s music in my past. I got good at burying my entire past.   It took years at excavating it all.

Here, at last, I was, 37 years later, happily remarried, two grown children, a career I loved, I discovered one thing was left unexcavated.  The music of Barry Manilow.

I wanted just to leave it in the past.  However I agreed to go, as long as our supportive friends, Ron and Doris, came with us. I was scared. I didn’t know what to expect.

On one hand, my fears were justified.  Let me just say all this first.  Over the years I never attended big concert events. Never.  I was strictly a small arena gal.  Living in New York City, we have been fortunate to go to small venues and see highly gifted artists, mostly unknown, on a regular basis. Over 40 years I had been to large concert hall settings exactly six times: twice to see Barry as a teen ager and the other times as invitations as a pastor from congregants to concerts.  I hands down love the intimacy of small settings over the huge stadium stages with blinding lights, pounding sounds, and let’s face it, the commercialized shtick.
​
Yes, that was my initial experience of sitting there at Barclays, with glow sticks, the driving beat to “It’s a Miracle” to the exploding streamers at the end. It was sensory overload for me.  The other huge shock was seeing middle-age ladies behaving like they’re at a Holy Ghost revival. They were their feet, waving to the beat, hands it the air.  I think it would helped if the tickets had warned us old fogies to wear comfortable shoes, because those ladies in front of us were out of their seats hooting and hollering 90 percent of the time.  Which meant we had to be on our feet 90 percent of the time.
Seeing Barry after 37 years flooded me with a mixture of emotions.  Joy. Overwhelmed. Regret. Regret for all the years missed and mistakes made. Initially I saw a man who seemed slower, preoccupied, tired. I thought, here he is, 72, major hip surgery, the end of a long tour, closing for the first time in his home town of Brooklyn, not but a stone’s throw from the neighborhood he grew up in on his birthday, to boot.  What’s there not to be nostalgic about, huh?

Barry quickly proved why he was dubbed “Showman of his Generation.”  He moved spryly and expertly into next sets, never losing a beat.   As a reprobate fan, I feared facing a lot of unknown material, although I had studiously reviewed all his albums since my last album purchase which was in 1979, One Voice.  I was surprised to find that songs from what I felt Barry’s most creative, seminal work, for example on 2:AM Paradise Café,  Here at the Mayflower, 15 Minutes, and Harmony were not featured.  Although Barry did throw in the 1960s’ hit “Let’s Hang On,” I discovered much to my surprise, I was deeply touched by his dream duet with Judy Garland, “Zing, Went the Strings of My Heart.”  I remembered his Wall Street interview how he talked about being a fan of Garland since a child.  Barry mentioned that when he had the opportunity to hear her perform in the early 1960s, with a huge, powerful orchestra just 10 feet away, “to this day, I’ve never seen or felt anything like it.”  It was amazing that he recreated that moment for all of us.

The medley of the old hits opened the door to past, but it was the rendition of “Even Now” and “All the Time” the left me weeping, bringing up memories, of a time when Barry’s music was a lifeline during years of darkness.  Barry sang “Even Now” with the same force of longing and sorrow as when first sung back in 1978. Because Barry has this gift of interpretation, connection of emotion to song to audience, he has achieved the devotion he has.  Among his fans, including myself, this connection has seen us through very difficult times.

“All the Time” sung intimately off to the side a spinet piano, were introduced with Barry’s now classic comment, “misfits are not misfits among other misfits.” “All the Time” brought forth another cascade of tears, an “aha” song, a song of triumph and endurance.

As we left Barclays amidst piles of confetti and fading strains of “happy birthday,” it was mixed experience. It was phenomenal to see Barry.  It began to sink in about all the years I had missed because of the choices I had made to stay away. There weren’t going to be many more concerts.  The past was gone.  I had to accept this.  One thing, however, I was looking forward to. One day, seeing Barry and Bruce Sussman’s musical, Harmony, on Broadway.  What a crowning achievement to an already illustrious career.

In the meantime, I continue to read, re-listen to Barry’s music, along with other artists that pass through my church doors, and the other invitations we receive around the City. It is still a rich life, after all.  I am back to writing more than ever.

“God made the world for the delight of human beings-- if we could see His goodness everywhere, His concern for us, His awareness of our needs: the phone call we've waited for, the ride we are offered, the letter in the mail, just the little things He does for us throughout the day. As we remember and notice His love for us, we just begin to fall in love with Him because He is so busy with us -- you just can't resist Him. I believe there's no such thing as luck in life, it's His. “
Mother Teresa.

Give the gift of music to the next generation through donation to:
The Manilow Music Project
8295 South La Cienega Boulevard
Inglewood, CA 90301
info@manilowmusicproject.org